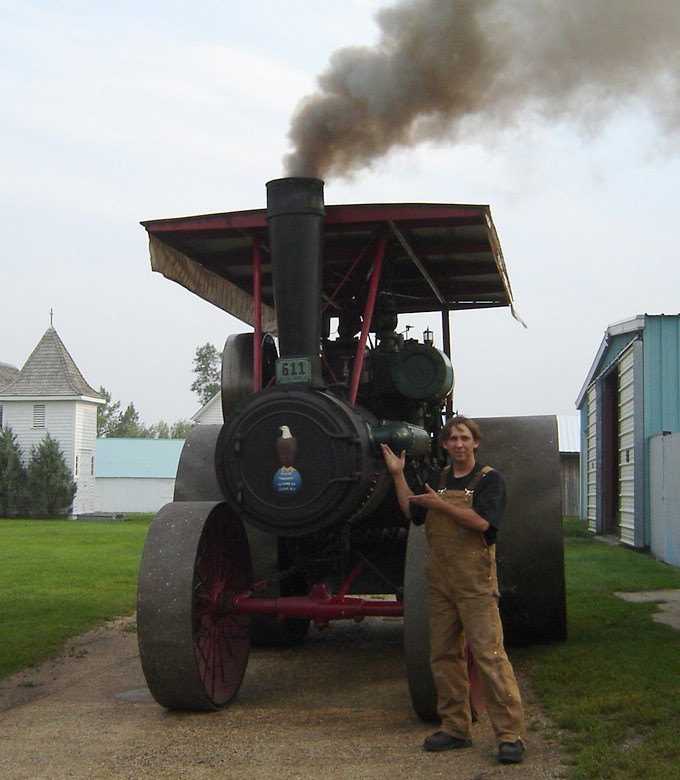 Whats all this then… ?

I am Leo, owner of the site and current curator of “the virtual museum”. I reside in Canada, and have a background in theatre design, pyrotechnics and motion picture special effects. My most recent adventure (aside from my newly found love of antique engines) was founding special effects company Bleeding Art Industries in 2002 which I currently co-own and operate with Becky, my partner in life and crime.

Just to take a moment to speak to the subject of Becky, I have to publicly state that I am absolutely indebted to her for supporting and (in her own way) encouraging me in this endeavor. As crazy as this obsession with antique iron and technology seems, it is my passion and my release. Never has the statement “Putt putt of my dreams, confusion to my wife” been so aptly applied. Old iron has been the focus of many heated discussion, many adventure, and a great number of hours of joy and I could have done it without her being there for me. Thank you, Becky. If any of you are interested in Becky’s world of wonder, click on this tag. She has her own website which explores her passions.

If you are asking yourself, “whose fault is all this… who could allow such a thing to happen?”, you need to read about Nora. Click here to read about how she cursed me with this addiction!

The other people you might see or read about on this site include Peter who is a heavy duty mechanic, a fantastic welder, and a restorer of vehicles. Peter is the best metallurgist I know of, and has the most smarts I have ever seen. Perhaps one day I can persuade him to post a picture of his dragline in the gallery.

Andrew is another friend and engine advisor. He is a dealer of engines and a collector in his own right. Andrew also has more information in his head about the history of Canadian engines than anyone I know of. Sadly due to a lack of content (I keep asking!) their bio’s are pushed to the back of this page.

This is my 4 hp Eaton Waterloo boy. It was my first Hit and Miss engine. She has been making the rounds at a few engine shows in the East. She appeared at the Reynolds show in 2007 and most of the year in 2008. Her ignitor gave up the ghost in the fall of 2008 and was rebuilt at Adrian’s magneto service in 2009. He did a great job! I reinstalled it and had her running at shows in the fall of 2009. I have two sisters for her who should see full restoration in the coming years.