One of the earliest memories I have is of a grain elevator which was at a local historical park. As a child I spent days playing here and watching the engine in what they called the “office” banging away. Back then the muffler was out in the open and I burnt myself on it a number of times. I also used to get up close to feel it’s thump and breathe the sweet smell which emanated from it. Inside the engine was making the music that only such an engine makes. I recently went back and shot this video of it. The muffler is now well out of reach of the children and well silenced. I am also sure now, that unleaded gasoline is used. Grain elevators too are now fading into a distant memory. No longer are these “prairie sentinels” dotting the horizon as they had been when I was a child.

Once I had begun the collection, I thought that it would be a great thing to have a similar engine. I had started looking as early as 2005. At the time I was in Regina, SK working. I contacted the Saskatchewan Wheat Pool via email but the reply was that all the engines in the system had been replaced by electric ones and had been found “good homes”.

I checked my favorite website for antique engine listings but these engines were going for a lot more than I could afford, or thought they should be worth. One came up in Newfoundland but by the time I had called, it had been purchased. I did later complete another sale with that gentleman which is noted on this website. I began to seek out local auctions where engines might be and began to find that there were a few from local collectors coming up. One in particular caught my eye and I contacted the seller and arranged a viewing.

Marie met me a week prior to the auction to show me her late husbands collection. She lived 5 hours north of me, but I had work which took me within what I mistakenly thought would be an hour and a half drive. As the Arrogant Worms song goes….”Canada is Really BIG!” 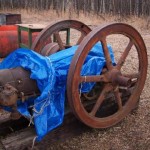 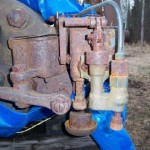 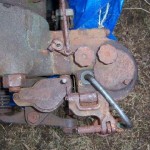 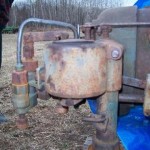