I purchased this engine in the summer of 2007 and have been trying to get onto the long journey to pick it up. My hope is to have it in my hands May / June so I can start showing it at shows. Peter did a wonderful job of restoring this and I think it will be well worth the wait. 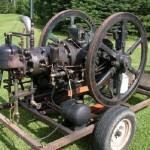 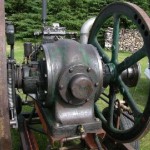 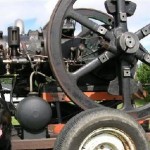 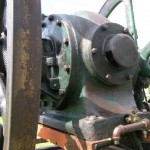 Andrew sent me this quote for the FBMY semi-diesel engine:

“Fairbanks-Morse powerplants evolved by burning kerosene in 1893, coal gas in 1905, then to semi-diesel engines in 1913 and to full diesel engines in 1924. In 1916 the company began production of the Model Z single cylinder engine in one, three and six horsepower sizes. Over a half million units were produced in the following 30 years. The model Z found favor with farmers, and the Model N with fishermen. The Company also had brief forays into building automobiles, cranes, televisions, radios and refrigerators, but output was small in these fields. After the expiration of Rudolf Diesel’s American licence in 1912, Fairbanks entered the large engine business. The company’s larger Model Y semi-diesel became a standard workhorse, and sugar, rice, timber, and mine mills used the engine. The model Y was available in sizes from one through six cylinders, or 25 to 200 horsepower. The Y-VA engine was the first high compression, cold start, full diesel developed by Fairbanks-Morse without the acquisition of any foreign patent. This machine was developed in Beloit and introduced in 1924. The company expanded its line to the marine CO engine, and the mill model E, a modernized Y diesel.”