2007 was a great year.  A big thanks to all those who I met at these shows, both displaying and visiting.

I had made the previous year (2006) but did not make 2007 due to work commitments.  This is a smaller show, but you can always find Dan or his brother there exhibiting pieces from their great engine collection.  A very active group.   I will post video of the 2006 show as time allows.

Leslieville has a younger, keen, and very active group which puts on a great show.  I highly recommend visiting these guys as they have allot of heart.   I showed a trailer load of engines at this one, most of which were NOT working.  I had simply ran out of time to get them all running so I went thinking that maybe I could run one and work on the rest.  Well I spent way too much time chatting and visiting.  My running engine was a 7 1/2 hp FBMZ engine.  Others on the trailer were my Galloway round rod, IHC 6 hp M style, Sattley 5 hp. 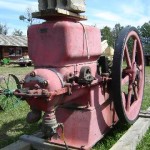 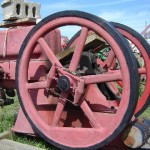 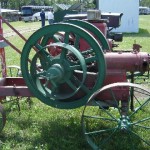 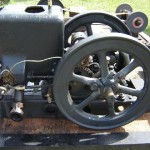 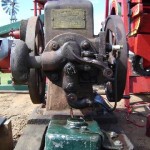 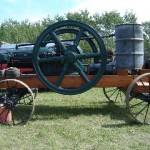 This was perhaps the highlight of the years engine shows, if only for the prestige of showing there.  The Reynolds is internationally known for its collection and it was an honor to be able to have engines that were a match to those brought out by the museum.  For this one I had my newly arrived 6 hp Napoleon (H/M), DesJardin 4 hp COTW, DesJardin 4 hp new style, FBMZ 7 1/2, and Waterloo boy (T. Eaton Tagged) 4 hp.  I met many more very serious engine guys here and made some great contacts.

I had visited the summer show and the video and pictures are below.  This was the fall show which was much smaller in nature.  It was a good one day show and was nice to get away and work on my engines while showing.

This was Dave Fitche’s show.  Dave was a fellow who I met first at Leslieville, then Irricanna, then… well, pretty much every show I attended in the season.  Dave is the curator at the Camrose Museum and a great resource for the steam and engine world.  I speak with Dave on a fairly regular basis now and his generous nature and depth of knowledge make for great conversations.  This show also made me keenly aware of how enthusiasm of the hobby fades with time and how important it is to keep a younger generation interested.  The guys who display and run this show are all aging, but are still so full of life.  It is of note however, how the back pains, arm strains, and the ill health of age can slow an entire community of hobbyists.  Even in my third year of collecting (and with the tender young age of 42) my engines look heavier with each show…  Hehehe.